A HOWL of rage has gone up among British farmers over BBC TV’s Brass Tacks film on their industry.

“I have just taken part in a nightmare,” wails British Farm Produce Council chairman Charles Jarvis in a letter to the Daily Telegraph.

Mr Jarvis says he and colleagues in “modern meat production” were “set up” by the BBC.

END_OF_DOCUMENT_TOKEN_TO_BE_REPLACED

A CONTROVERSIAL BBC television programme which said people may be harmed by drugs used on farm animals, has been attacked as a “nightmare” experience and “trial by television of the worst sort” by two farm industry panellists who took part in it.

The programme, shown on May 8, was the first in a new BBC2, “Brass Tacks” series. It included a 30-minute film showing intensive farms and slaughter-house scenes, followed by a studio debate on alternative “organic” farming.

END_OF_DOCUMENT_TOKEN_TO_BE_REPLACED

LETTERS TO THE EDITOR
Daily Telegraph, 12 May 1979

SIR – I have just taken part in a nightmare. Not one of the usual kind from which one wakes to the comforting reassurance of familiar objects, but under the glaring lights of a television studio as a so-called panellist in the first of the new BBC-2 series, “Brass Tacks”.

END_OF_DOCUMENT_TOKEN_TO_BE_REPLACED

HUNDREDS of farmers sprang to the defence of the agricultural industry on radio phone-ins around the country after the BBC’s controversial television report on pig and poultry farming, says the National Farmer’s Union.

The programme, shown on BBC2, debated the use of drugs and intensive farming methods and the possible harmful effects they could have. Farmers were enraged by the cover of the Radio Times which advertised the programme. It showed a pig and carried a mock health warning of the type used on cigarette packets.

END_OF_DOCUMENT_TOKEN_TO_BE_REPLACED

Without doubt, “Brass Tacks” (BBC-2) is one of the most exhilarating studies of human emotions on any of the three channels. Especially when it turns its visual and verbal spotlight on animals reared on the “battery” system.

The return of this explosive series slammed straight into contrasts between humans and living meat products. How humans subjected to similar conditions in intensive farming husbandry would soon be the victims of disease epidemics.

Even to the example of pigs suffering nervous breakdowns due to their style of living and having to be treated with tranquillisers.

END_OF_DOCUMENT_TOKEN_TO_BE_REPLACED

THAT punchy, percussive introductory music is a give-away. Another trial by television is under way. This time it was in the form of Brass Tacks, BBC-2’s new series designed to give the public a chance to have its says on controversial matters by providing subsequent phone-in programmes on local radio stations all over the country.

But first you must have a controversy. The case against has to be made.

The first subject for dissection on Tuesday night was British intensive-farming methods which provide relatively cheap food at some risk to our health. Needless to say, our farmers did not emerge from the fray with reputations enhanced. They were judged bottom of the European league of hygiene for a start.

END_OF_DOCUMENT_TOKEN_TO_BE_REPLACED

LANCASHIRE branch of the NFU have sent a resolution to headquarters deploring the BBC’s handling of its “Brass Tacks” programme on Tuesday evening which Executive Committee members alleged was deliberately contrived to stimulate all the emotive arguments over current farming methods.

Said Mr Chris Halhead, during Wednesday’s executive meeting: “I am sick of trying to produce food for people who are constantly trying to pull the rug out from under us. People are better fed now than they every have been.

TELEVISION
Nancy Banks-Smith
The Guardian, 9 May 1979

GILBERT HARDING was not only the first TV man, he was the first two-way TV man. A friend remembers him “watching and arguing with the television.” He would carry on these one-way discussions with whomever it was he happened to be watching and get quite violent about it.

I remember him having a set-to like that with Cliff Michelmore and then, when the programme was finished, he phoned up Michelmore and continued the argument in person. People have always talked to television; it is just that television has not always listened.

Following Peter Fiddick’s programme on Two Way Television, Brass Tacks (BBC-2) was something like three-sided television. Brass Tacks is transmitted live. Then all the BBC’s local radio stations run phone-ins – most the same night, some less enthusiastically the next morning. Finally on Monday, Return Call will report the audience reaction in a 10-minute programme just before midnight. To me that suggests a disappointing dwindle with the Brass Tacks bellow tailing away to a whisper.

END_OF_DOCUMENT_TOKEN_TO_BE_REPLACED 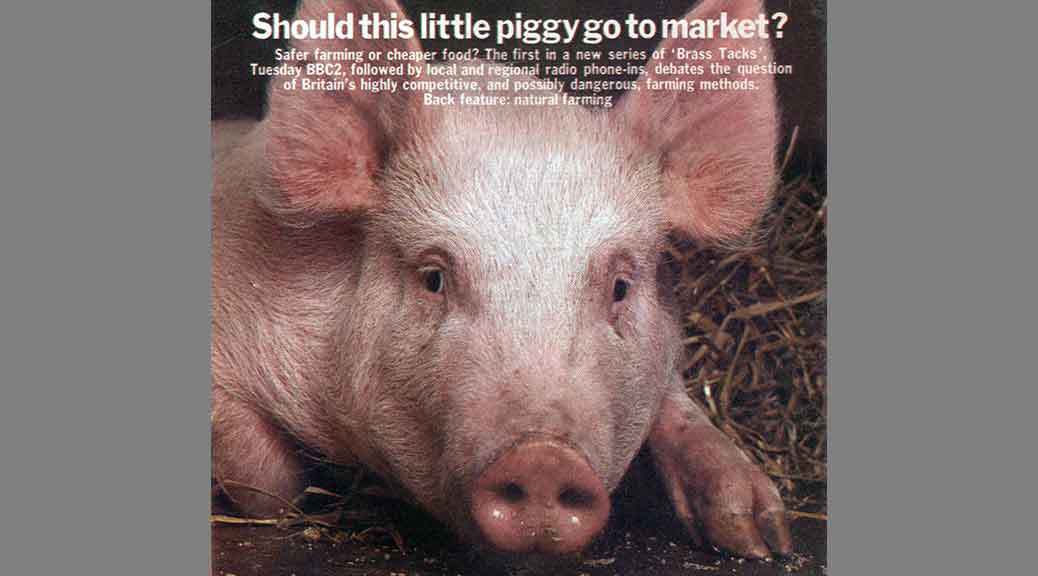 Judge for yourself – as the people who make decisions come face-to-face with the people those decisions will affect. First the arguments, then your chance to join the debate.

Britain’s public health enemy number one is salmonella. It’s a source of disease that lurks in most of the meat that we eat, and it’s on the increase because of the way our farming industry is run.

Diseases spread quickly amongst pigs and chickens in factory farms unless huge quantities of drugs are used to keep them at bay. And those diseases increasingly spill over into the human population. So is it time to call a halt? Is it time to chose between cheap meat and safe meat?

END_OF_DOCUMENT_TOKEN_TO_BE_REPLACED

AT last, democracy is coming to television. Tonight, you, the viewers, can pick up your phone or put pen to paper and have a chance to air your opinions.

The revolutionary experiment is the brainchild of the Manchester-based “Brass Tacks” team.

After tonight’s programme in the new “Brass Tacks” series called “It Shouldn’t Happen to a Pig” (BBC-2, 8.10 pm.) viewers will be invited to give their views, either by phoning any local BBC radio station or by writing to the producers.